The company announced its P40 Series smartphones at the event, which offer impressive hardware and powerful new features compared to the previous generation of handsets.

Both the P40 and P40 Pro both feature HiSilicon Kirin 990 chipsets with 5G support, which means that this new lineup of devices will be able to connect to 5G networks in supported regions.

The company also announced the P40 Pro+ – an improved version of the Huawei P40 Pro which boasts an extra periscope lens and improved hardware specifications.

Other new features include an overhauled chassis design which uses a new Quad-Curved Overflow display that provides a bezel-less aesthetic.

This allows the OLED screen on the P40 Pro to wrap around the sides of the phone and make the display truly bezel-less.

“With an outstanding sensor, camera systems that we co-engineered with Leica, powerful chipset and Huawei XD Fusion Engine, the Huawei P40 Series exemplifies our focus and offers an all-day Super Definition experience to help consumers realise their creative vision.”

Huawei has made another leap forward in mobile photography with its new flagship handsets, offering better picture and video quality as well as improved zoom functionality.

The display technology on the P40 Pro and P40 Pro+ is greatly improved from the previous generation. In addition to its new form factor, the display panels in these devices are now 90Hz and 120Hz respectively.

They also boast higher resolutions than their previous-generation counterparts.

The smartphones are powered by the Kirin 990 chipset, which is built on a cutting-edge 7nm architecture and includes support for powerful features such as GPU Turbo and on-chip AI processing.

In terms of camera hardware, the P40 boasts Leica triple-camera system with a telephoto, wide-angle, and ultra-wide angle lens.

The P40 Pro sports four lenses on its camera array and includes a time-of-flight depth sensor for improved bokeh effects.

This unique arrangement allows the Huawei P40 Pro+ to support up to 100x digital SuperZoom functionality for photos.

“This is the most powerful zoom on a smartphone ever,” Yu said.

Huawei’s P40 Pro+ also boasts 12GB of RAM, with the other devices sporting 8GB of memory.

HMS is a replacement for Google Mobile Services, which runs natively on Android devices and enables certain features and services.

The biggest change consumers will notice with HMS is that they will not be asked to log in to their Google account on startup. Instead, they will log in to their Huawei account, which will provide a similar underlying layer of functionality across the device.

Huawei also announced its own voice assistant which responds to “Hey Celia” and is positioned to compete with solutions such as Google Assistant, Bixby, and Siri.

“In future, we will launch the ‘Hey Celia’ AI assistant in more countries,” Yu said.

The Huawei P40 Pro Plus will be available in Ceramic Black and White.

Huawei also recently launched its P40 Lite mid-range smartphone, although this is not yet available to purchase in South Africa.

These new Huawei P40 Series smartphones will be priced as follows:

The specifications of these new smartphones are listed below. 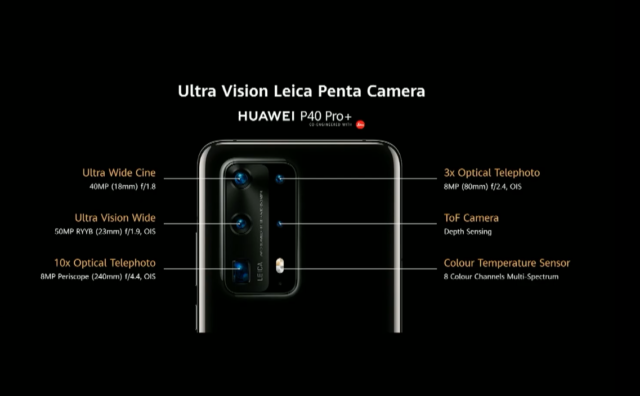 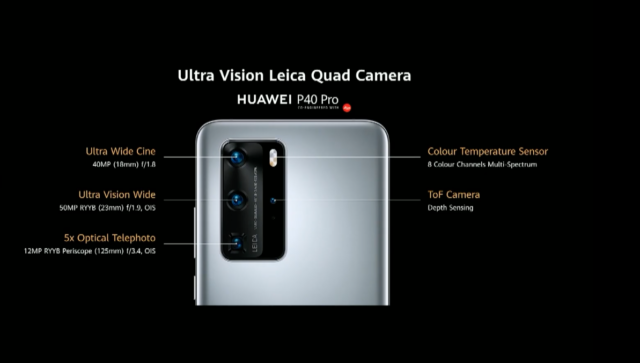 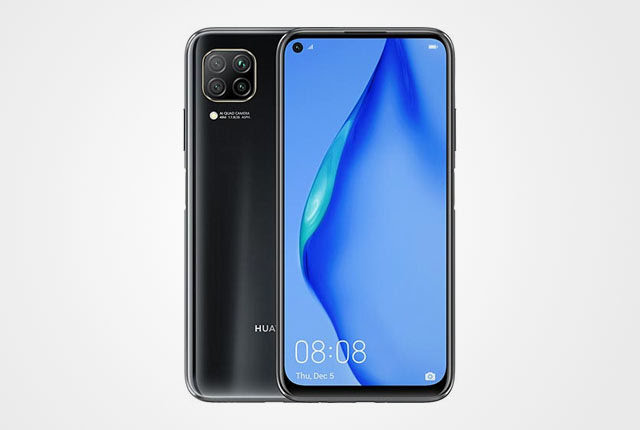 Previous story :Hackers have been targeting South African networks since the Coronavirus outbreak

Next story :The USA has surpassed China & Italy in new cases of Coronavirus.

Facebook, the world’s largest social media company by market capitalisation and user numbers is spending billions of dollars in India’s largest mobile operator which is owned by Asia’s richest man. The deal which was announced Wednesday would see Facebook spending $5.7 Billion for a 9.99% stake in Jio Platforms, the digital technology arm of Indian […]

Speaking with journalists after winning his first Oscar for Best Adapted Screenplay, Jojo Rabbit and Thor: Ragnarok director Taika Waititi had other things on his mind. When asked what he thought writers should be demanding in the next round of discussions with producers, Waititi put Apple’s controversial laptop keyboards on blast. “Apple needs to fix […]

Apple has spent the past 10 years trying to convince everyone that the iPad and its vision of touch-friendly computing is the future. The iPad rejected the idea of a keyboard, a trackpad, or even a stylus, and Apple mocked Microsoft for taking that exact approach with the Surface. “Our competition is different, they’re confused,” […]

Coronavirus Updates: A new case of the virus has tested positive in Gauteng Province

A woman in Gauteng has tested positive for the COVID-19 coronavirus. This makes it the second confirmed case of the coronavirus in South Africa. News24 reported that a 39-year-old woman from Gauteng has been diagnosed with the virus. The woman is part of a group who recently travelled to Italy – the same group from which a man […]

Minister of Health Zweli Mkhize has announced that two South Africans have died after being infected with the COVID-19 coronavirus. “This morning, we wake South Africans up with sad news that we now have our first deaths resulting from COVID-19,” Mkhize said in a statement. “These two deaths occurred in the Western Cape. One at […]

Idris Elba is the latest celebrity to test positive for the coronavirus. He made the announcement Monday. “This morning I tested positive for Covid 19,” he wrote. “I feel ok, I have no symptoms so far but have been isolated since I found out about my possible exposure to the virus.” The U.K. star joins a […]

MCU Leaks: Dead Avengers ‘Endgame’ might be back in MCU Phase 4 with a huge plot twist.

The more I tell you that Doctor Strange in the Multiverse of Madness is the most exciting film of MCU Phase 4, given all the official revelations from Marvel and the plethora of reports about the film’s plot and cast, the more proof I discover to reinforce that idea. Stephen Strange will not only have […]

Friends is back after 15 years and nine months, upcoming streaming service HBO Max announced Friday. The full cast of Jennifer Aniston, Courteney Cox, Lisa Kudrow, David Schwimmer, Matt LeBlanc and Matthew Perry will be reuniting for an unscripted special in May 2020. “Guess you could call this the one where they all got back together — we are […]

This toilet paper calculator lets you know how long your bathroom stash will last.

Unprecedented times call for unprecedented measures, and that’s precisely how we as a society end up with something like How Much Toilet Paper?!, a new website that calculates the dwindling amount of our most prized bathroom supply. It’s a relatively simple tool: you put in the number of rolls you have left and the number of […]

As it prepares to pay the first “coronavirus claims”, South Africa’s Unemployment Insurance Fund (UIF) has seen an almost tenfold increase in the number of users visiting its claims site. A spokesperson of the UIF confirmed to Business Insider South Africa that its electronic claims site, Ufiling.co.za, saw almost 478,000 visits this week as more people […]

Liquid Telecom South Africa is launching a 5G wholesale network according to the company’s press statement released yesterday. Available from early 2020 in all major South African cities, this latest fifth-generation of mobile Internet connectivity will enable wholesale operators to create innovative, ultra-fast, and scalable digital services for their customers. Liquid Telecom will use its […]

The racket involves sending people an email which says malware has been installed on their computer, allowing cyber-crooks to capture footage of their intimate solo moments. Victims are then asked to hand over cash in order to prevent the criminals releasing a video of the smutty scene to all their friends and family members. This […]

Apple Event: The new iPhone 12 officially has 5G and now a lot faster

You guessed it right for the past year since 5G started rolling out, the company on Tuesday announced the new line of iPhone 12 which will be running the ultra-fast 5G technology among other new features. As the rumours suggested, the new iPhone 12 line up features an aluminium build and a body redesign which […]

I am one of the people who have long cried for Spotify family in South Africa for a mere reason that its cheaper than paying single-user accounts for everyone in the family. Spotify South Africa has launched Spotify Family that can be used by up to 6 members under one beautiful R100 per month subscription. […]

Written by Calvin May 5, 2020May 5, 2020
Saving Bookmark this article Bookmarked

Sunday Times has reported that South Africans should expect to see power cuts once again as soon as the lockdown is lifted in May which will span until August 2021. Also Read: Proposal to terminate all SAA workforce by the end of April Eskom’s head of power generation Bheki Nxumalo told the Sunday Times that […]

Telkom has new FreeMe contracts – Here are the new prices.

The new month-to-month SIM-onlty contracts and prepaid mobile plans will take effect from Friday 20 March 2020 and will offer larger data allocations compared to the previous products. Telkom has also added off-net calling minutes to all of its new FreeMe SIM-only packages as an added value offering, although the prices of these products have […]

COVID-19, Flu or allergies? How to tell the difference.

The coronavirus has infected more than 100,000 people worldwide. With all of the news of event cancellations, empty flights and health precautions (wash your hands!), it’s natural that people may get a little anxious every time they feel a tickle in their throat or the beginnings of a bad cough. While the coronavirus is certainly something to take […]

Foreigners are not getting their UIF claims – Here’s why

Unemployment Insurance Fund (UIF) payments started coming through a few days ago with the latest coming through on the 25th of April with the exception for foreigners. When the Ministry of Labour launched the online application portal for the UIF claims, companies and individuals were required to submit a lot of requirements which made the […]

Written by Calvin May 2, 2020May 2, 2020
Saving Bookmark this article Bookmarked

Alphabet, Google’s parent company, achieved a major financial milestone Thursday, hitting $1 trillion in market capitalization. The tech giant joins Apple, Amazon and Microsoft as the only US companies to have reached that threshold. The news comes during a period of transition for Alphabet. Last month, Google co-founders Larry Page and Sergey Brin said they would […]

Leave a comment Cancel
Comments to: P40 Pro Plus, P40 Pro and P40: Everything announced by Huawei at its P40 event.
Cancel reply

Welcome to Typer
Brief and amiable onboarding is the first thing a new user sees in the theme.

Read Smart, Save Time
Pick all the topics you are interested in to fill your homepage with stories you'll love.
Apps