It’s been a few years since we last saw the full Fast and Furious family on the big screen. The Fate of the Furious – perhaps better known as Fast 8 – hit theaters back in 2017 and was the first film in the franchise made after the death of Paul Walker. It was certainly an action-packed car flic worthy of its Fast predecessors, but it stretched reality even further than previous films had, and it was ultimately met with very mixed reviews. With three years to ponder the future, will the new film fare better? 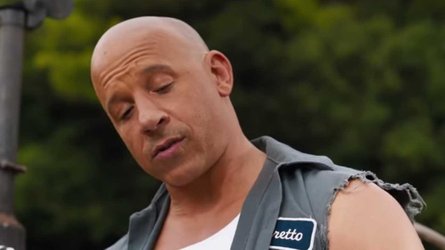 Dom is daddy Dom now, and though he says he can’t live his life a quarter-mile at a time anymore, we suspect that will change real quick if his son is threatened. The trailer opens with the peaceful setting we saw early this week in the teaser clip, but from there the world goes all furious on us without any further mention of the youth. Instead, it turns out Dom has a younger brother played by John Cena in the flic.

He also doesn’t seem to like Dom very much, but being a Toretto, he has a penchant for – you guessed it – driving fast. He also has some connection to Charlize Theron’s Cipher, who was the main baddie in Fast 8. So in a nutshell, there’s your plot.

Of course, mixed in with this basic premise is the familiar Fast family of Tej, Roman, Letty, Mia, Ramsey, and holy smokes, even Tokyo drifter Han (played by Sung Kang) is magically back from the dead. Apparently he wasn’t blown up after all, and we even see him rocking an orange Toyota Supra in some sideways action. We also see a rocket-powered Pontiac Fiero, a Dodge Charger using a rope to swing across a massive cavern, and a futuristic jet magnetically picking up a Mustang in flight. So yeah, it’s a Fast and Furious movie.

We expect there will be more trailers in the future, but this first look certainly is interesting. Fast 9 hits theaters on May 22.

Previous story :How to use Apple Airpods with an Android Phone - Follow these steps

Next story :Intel Core i3 vs. i5 vs. i7: All you need to know before buying either of them.

Coronavirus Updates: A new case of the virus has tested positive in Gauteng Province

A woman in Gauteng has tested positive for the COVID-19 coronavirus. This makes it the second confirmed case of the coronavirus in South Africa. News24 reported that a 39-year-old woman from Gauteng has been diagnosed with the virus. The woman is part of a group who recently travelled to Italy – the same group from which a man […]

South Africa has 2,003 confirmed COVID-19 coronavirus cases, Health Minister Zweli Mkhize revealed. This is an increase of 69 new cases from yesterday’s figure announced by President Cyril Ramaphosa. Six more people have died as a result of the virus, putting the total number of deaths at 24. A total of 73,028 tests have now been […]

A driver who recorded themselves hitting 309km/h on the N1 in Gauteng was recently arrested while attending a funeral in Limpopo. Social media comments regarding the video of the speedster were mixed, with many people slating his actions as irresponsible and criminal while others defended the driver’s actions. To find out more about the process […]

Guess what? A foldable iPhone might be coming our way very soon.

In this week’s Apple Core roundup, we’re dissecting the latest clue about Apple’s vision for a foldable device and listing off our 2020 iPhone wishlist based on what’s actually plausible. Apple gets another foldable iPhone patent On Tuesday Apple received a new patent for a flexible display mechanism that would protect a screen from creasing […]

Apple Event: The new iPhone 12 officially has 5G and now a lot faster

You guessed it right for the past year since 5G started rolling out, the company on Tuesday announced the new line of iPhone 12 which will be running the ultra-fast 5G technology among other new features. As the rumours suggested, the new iPhone 12 line up features an aluminium build and a body redesign which […]

South Africa has tabled a proposal meant to fight Piracy also known as copyright infringement online by placing the responsibility on Internet Service Providers (ISPs). According to a draft white paper published on the 9th of October 2020 by Minister of Communications and Digital Technologies Stella Ndabeni-Abrahams on 9 October in the Government Gazette, the […]

The North Gauteng yesterday dismissed a court application submitted by the Fair-Trade Independent Tobacco Association against the court’s previous ruling on the tobacco ban. The association previously made an appeal on 26 June 2020 which argued that the country’s ban on the sale of cigarettes was irrational. The appeal was dismissed. FITA’s chairman Sinenhlanhla Mnguni […]

The human is around 500MP and Samsung wants something is attempting to produce something better than that. Samsung’s head of its sensor business team, Yongin Park, has issued a press release explaining how the company is trying to make an image sensor that will surpass the resolution of the human eye. A 600MP sensor would be massive […]

With the deadly coronavirus spreading across the globe and deaths hitting 170, the World Health Organization (WHO) has declared the virus a public health emergency of international concern. The main reason for the declaration is its spread to other countries, including those “with weaker health systems, and which are ill-prepared to deal with it,” the […]

Nicolas Cage to star in Tiger King as Joe Exotic

As soon as Netflix’s Tiger King true-crime documentary series exploded into popularity, Hollywood began turning the almost impossibly outlandish story of the bombastic Joe Exotic, Carole Baskin, and their tiger-fueled feuding into a scripted series. Nicolas Cage is set to star in a scripted series centred on Joe Exotic, the subject of the Netflix docuseries “Tiger King,” according […]

Written by Calvin May 6, 2020May 6, 2020
Saving Bookmark this article Bookmarked

‘Blood and Water’ Season 2: Everything we know about the African teen drama

‘Blood and Water‘ has become Netflix’s second African Original after the success of Queen Sono. Both series were ordered in 2019 as part of Netflix’s efforts to broaden their content and expand into new markets. Africa had been in the works for a long time. The teen drama only has 6 episodes on the first […]

Mike Bloomberg, the billionaire former mayor of New York who had hoped to self-fund his way to the Democratic presidential nomination but was spurned by voters in Tuesday’s balloting, dropped out of the race Wednesday. Bloomberg endorsed Joe Biden, saying the former vice president had the best chance to win in November. “I’ve always believed that […]

Did you know? This is what happens to your phone’s battery when you use fast charging

Samsung does it. So do Huawei, Google, OnePlus and now even Apple. Packaging a fast charger inside your new phone box is an increasingly common practice, at least for high-end devices. But do we pay a price for the convenience of charging our phones with a quick charger? Battery life has become a primary concern […]

eBay is escalating its fight against online price gouging during the coronavirus outbreak with a new outright ban on all sales of face masks, hand sanitizer, and disinfectant wipes. The new policy, outlined in a notice to sellers posted Friday, applies both to new listings and existing ones. eBay says it is in the process of […]

The first quarter Q1 Mobile Operator Report by MyBoradband has been released which showed that MTN still reigns supreme as the best mobile operator in South Africa. MyBroadband is South South Africa’s largest tech website that compiles these quarterly results from internet speed tests run through their Speedtest app across different networks by different users […]

Google says it has developed an artificial intelligence system that can detect the presence of breast cancer more accurately than doctors. A study that tested the accuracy of the system, which was developed through a collaboration between the tech giant and cancer researchers, was published Wednesday in the scientific journal Nature. The program was trained […]

It is of no surprise that Google has been up to this because the company was already into payments from the moment the Silicon Valley introduced us to Google Play. According to a statement from TechCrunch, Google is developing and testing its own Google Branded smart debit card that will also be linked to Google […]

Google has joined Zimbabwe is Celebrating the Southern African country’s culture week with an interactive Google Doodle showcasing the country’s national instrument called the Mbira.  The Doodle allows anyone to try out their hand at the magnificent instruments. The Google Doodle begins with an animation of a young girl walking with her mother, stopping to […]

As you are reading this, I am probably asleep because I spent the entire night watching Netflix’s second African original just in the name of an opinion otherwise known as a review – Some might agree with it and some may not for a couple of reasons in this review. Spoiler Alert!!! Please read another […]

Moody’s Investors Service cut South Africa’s credit rating below investment grade, delivering the country a full house of junk assessments as it grapples with a nationwide lockdown to curb the spread of the novel coronavirus. It now assesses the nation’s foreign- and local-currency debt at Ba1, one level below investment grade. The move reflects “continuing […]

Welcome to Typer
Brief and amiable onboarding is the first thing a new user sees in the theme.

Read Smart, Save Time
Pick all the topics you are interested in to fill your homepage with stories you'll love.
Apps